The one night only concert features students from Léman Manhattan and professionals from the worlds of Broadway, Jazz, and Classical music 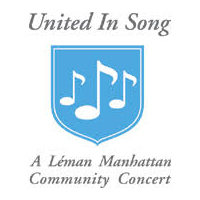 “United in Song: A Léman Manhattan Community Concert” is a unique, one-night only concert which features elementary, middle and high school students as well as faculty and parents from the Léman Manhattan Preparatory School performing with NYU students, Broadway artists and professional Classical and Jazz musicians.

A highlight of the concert will be the world premiere performance of “If We Stand As One,” a song commissioned by the Léman Manhattan Fine Arts Department and composed by Jim Papoulis to benefit the Tyler Clementi Foundation.The Tyler Clementi Foundation is an organization created by the Clementi family which seeks to prevent bullying through inclusion, assertion of dignity and acceptance as a way to honor the memory of Tyler Clementi: a son, a brother and a friend. In 2010, Tyler’s death became a global news story, highlighting the impact and consequences of bullying while sparking dialogue amongst parents, teachers, and students across the country. The story also linked to broader issues impacting youth and families such as LGBT inequality, safety in schools, youth in crisis, higher education support systems, and cyberbullying.

“If We Stand As One” will be performed by over 100 musicians in remembrance of Tyler Clementi and the spirit of standing up for one another. Other featured performers on the program include:

“If We Stand As One” and the “United in Song” concert were conceived by Lisa Nowicki, Director of Fine Arts at Léman Manhattan. This concert is sponsored by the Léman Community Association (LCA) as Nowicki is a recipient of a 2018 LCA Teacher Innovation grant. Musical Direction by Lisa Nowicki, Ryan John, Hannah Picasso, and Stanley Figaro.

The Tyler Clementi Foundation‘s mission is to end online and offline bullying in schools, workplaces, and faith communities. Founded in 2011 by the Clementi family in memory of Tyler – a son, brother, and friend – the foundation’s flagship bullying-prevention and education program is #Day1. Other programs include the Upstander Pledge, Upstander Speaker Series, Tyler’s Suite, Workplace Training, and True Faith Doesn’t Bully, a public education campaign that fights religious bullying. The Tyler Clementi Higher Education Act, introduced in Congress in 2016, would require colleges and universities receiving federal funding to prohibit harassment based on actual or perceived race, color, national origin, sex, disability, sexual orientation, gender identity or religion.